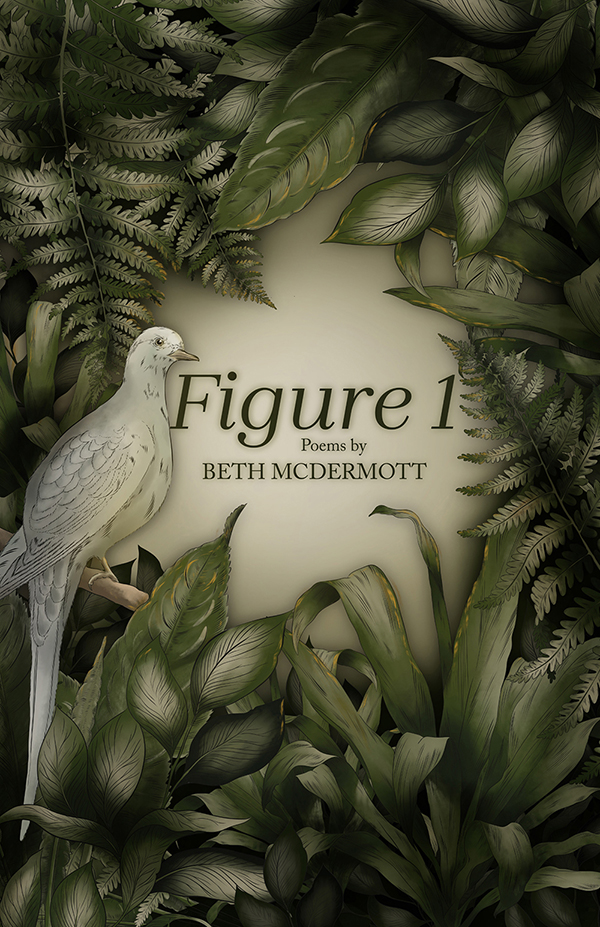 Much like the matroyshka in the first poem of Figure 1, each poem in this collection has a moment where it “splits, top from bottom, to reveal another / figure.” Aware of its own eclecticism, the book brings together disparate subjects and vocabularies—from the Latin of taxonomy to the French of ballet—to curate a careful scene for readers. Figure 1 is available from Pine Row Press now. Beth’s poetry has appeared in many journals including Tupelo Quarterly and Southern Humanities Review. Reviews and criticism about art and ecology appear in American Book Review, After the Art, Kenyon Review Online, and The Trumpeter. McDermott is an Assistant Professor of English at the University of St. Francis and recipient of a Distinguished Teaching Award, an Illinois Speaks Micro-Grant, and first place in the Regional Mississippi Valley Poetry Contest.

Hannah: Let’s talk about Figure 1! Part of what makes this collection feel so expansive is the application of ekphrasis not only to what we think of as conventional subjects like fine painting, photography, etc., but also to instructional figures, like those from anatomy books and the Audubon guide. So what inspired you to include so many different subjects of ekphrasis, and to emphasize the figures so much that they actually got the title?

Beth: There’s a really great media glossary, the University of Chicago Media Glossary, that has quite a few entries related to poetry and visual art. The perspective of some of the work that’s gone into the editing of the glossary–basically the criticism on ekphrasis–is that lots of different types of writing can be called “ekphrastic,” and I think it makes sense to approach imagery in the same way. So you can kind of read ekphrastically anything that you might call a static image. But at the same time, I recognize that some criticism might say in the very classic sense that it’s poetry about painting. So, I like to broaden it. I also think there’s commonality between the way we might talk about the gaze in terms of visual art and the way we might think about the gaze in terms of the scientist or naturalist who’s trying to understand what distinguishes one species from another. I’m thinking of a moth in a display box, or a bird in a diorama that’s meant to depict the bird in its natural habitat. I think it’s fascinating that someone might literally pin something down to attempt to know it or understand it or compare it with another of its type. That impulse has a lot in common with my poetry, in the sense that I’m drawn to images such as photographs, paintings, or “figures” that I then try to dialogue with, or even re-focus and re-frame. It’s both an exercise in knowing and not-knowing.

H: I love a short poem; I’m always trying to write good short poems. So, I’m interested to hear how other poets construct short poems to be full of image and meaning. When I read “Pull the Wool Away,” I read it as both the surface and the image, but also as a potential ars poetica for what you’re doing in a lot of the book. Is there anything specific you want to share about the process of that poem or what it means to the collection?

B: That’s really cool that you point that one out, because I have to tell you that Rebecca Morgan Frank, a tremendous poet and editor, helped me name the collection, but when I had named it first myself, it was Pull the Wool Away. So I was like “this will be the title poem and I’m gonna call it this.” So, I had sent it to a few contests under that manuscript title and then ended up making some changes to the whole structure of the book after I re-titled it.
The poem is, in the sense of all of the poetry that many of us students of poetry have read, inspired by the traditional pastoral, and the way someone might be sitting outside that environment, at a distance from what it would mean to think of rural life as “idyllic.” I have to admit I’ve never lived on a farm, and it’s that classic speaker looking out at somebody else who’s doing the work that Wordsworth would have told us was really lush poetic material because they were—I think he uses the phrase—real men, real language. So I certainly had all of that in mind writing that poem. I appreciate what you said about its relationship to the book as a kind of ars poetica because there is a way in which I think I have an interesting relationship to feeling, which is supposed to be gushing out of poets at all times. And I get kind of frustrated by that perspective, even though I understand it’s very true. So, as someone who also loves short poems, I definitely know what you mean about wanting to make as much as possible every little thing work on behalf of that.

H: It’s so deceptively difficult to write a short poem that actually means something.

H: You mentioned restructuring the book. I have to ask, what was your guiding principle in the three sections that you put together?

B: So, I think you’re in a PhD program that’s going to have you put together a book manuscript, is that right?

B: Okay, so, I’m not sure where you’re at in that process, but there’s a book coming out from University of Akron edited by Virginia Konchan and Sarah Giragosian (link here) and it’s called Marbles on the Floor: How to assemble a book of poems. And I had the chance to look at some of that in a galley state because I had interviewed the editors. And there are some really terrific essays in there that talk about this very question. I actually had the manuscript initially structured as though the ekphrastic poems were in one place, the science or plant poems were in one place, and then I think the third category was like, personal or something. And after thinking about some of the essays in that book and talking to Frank, who I mentioned earlier, I tried weaving. And it was really kind of counterintuitive, because I think there are so many good collections that do that kind of categorization really well and there’s often times a suite of connected poems in between, and that’s always extremely lovely. But for whatever reason, it was too clunky, maybe too disconnected, despite the fact that I was really trying to have the opposite occur and have everything fall into its neat little box. So breaking that up and doing some weaving, but still trying to make the poems talk to each other, I think ended up improving the structure.

H: Yeah, that goes towards another question I had, actually. I’m sure that book you mentioned is going to be very helpful, I’ll be passing that along! I think the collection does achieve cohesion, which during reading, I couldn’t believe was happening because there are so many threads. From fine art to plant anatomy, from these agricultural scenes to descriptions of ballet positions. With that in mind, what was the guide on what made it into the collection and what didn’t?

B: I would say first the strength of the poem. There were definitely 4 or 5–even 6 at one point–poems that I was trying to arm wrestle into the book for the sake of length. There are some book contests that are very specific about how many pages they want. I had, at one point, interest from an editor in a much longer manuscript. So it was always a bit of a question of “how can I make this longer?” First, it was the strength of the poem. If it was a weak poem, I had to take it out. And, continuing to think about the language, some of the images that would repeat. There were even some times when I would use a phrase in one poem and a different version of it in another poem and so there was a kind of lexical commitment that I was trying to adhere to. And then formally, I was conscious of the fact that I have a lot of poems in couplets. Could I have thrown a prose poem in there? Maybe. But even doing that felt a little bit disingenuous to the manuscript. That’s not to say that there aren’t books that I think can do that, but perhaps I had so many threads, there were other ways that I had to try to constrain myself.

H: Like I said at the beginning of our call, I really appreciated a book that feels so of the midwest to me. Even the things that are about fine art and ballet, it speaks to me of the way that some people think there’s no culture in the “flyover country.” It can feel as if people think we aren’t having these deep thoughts about art. [Both laugh] So I really appreciated the way that those things were weaving together in this collection. It was so lovely to read.

B: Well I really appreciate that! Harpur Palate published an early version of a poem in this book. It was very much about the perception you were just speaking of that there’s not a lot to do in the “flyover states” as you put it. I think it’s especially interesting to consider the landscape in relation to art and preservation, because we probably have both seen a lot of shifting landscapes in our lives.

B: And some people might want to try to hold on to those.

H: Yeah, one other thing that struck me from the collection, a reaction that may not be produced in many readers, was when I read the poem “Strip Mall Bakery” and it says “on this land that glaciers have shaped . . .” it brought up to me memories of my brother, who’s an ecologist, he works for Iowa State, and how it sometimes seems that every conversation with him goes back to the glaciers.

H: It’s the constant reminder of them, in the landscape.